Sensing Serious Injury: What Can Motion Detection Devices Tell Us About Horse Health?

April 1, 2021 no comments in The Latest in Objective Lameness Evaluation 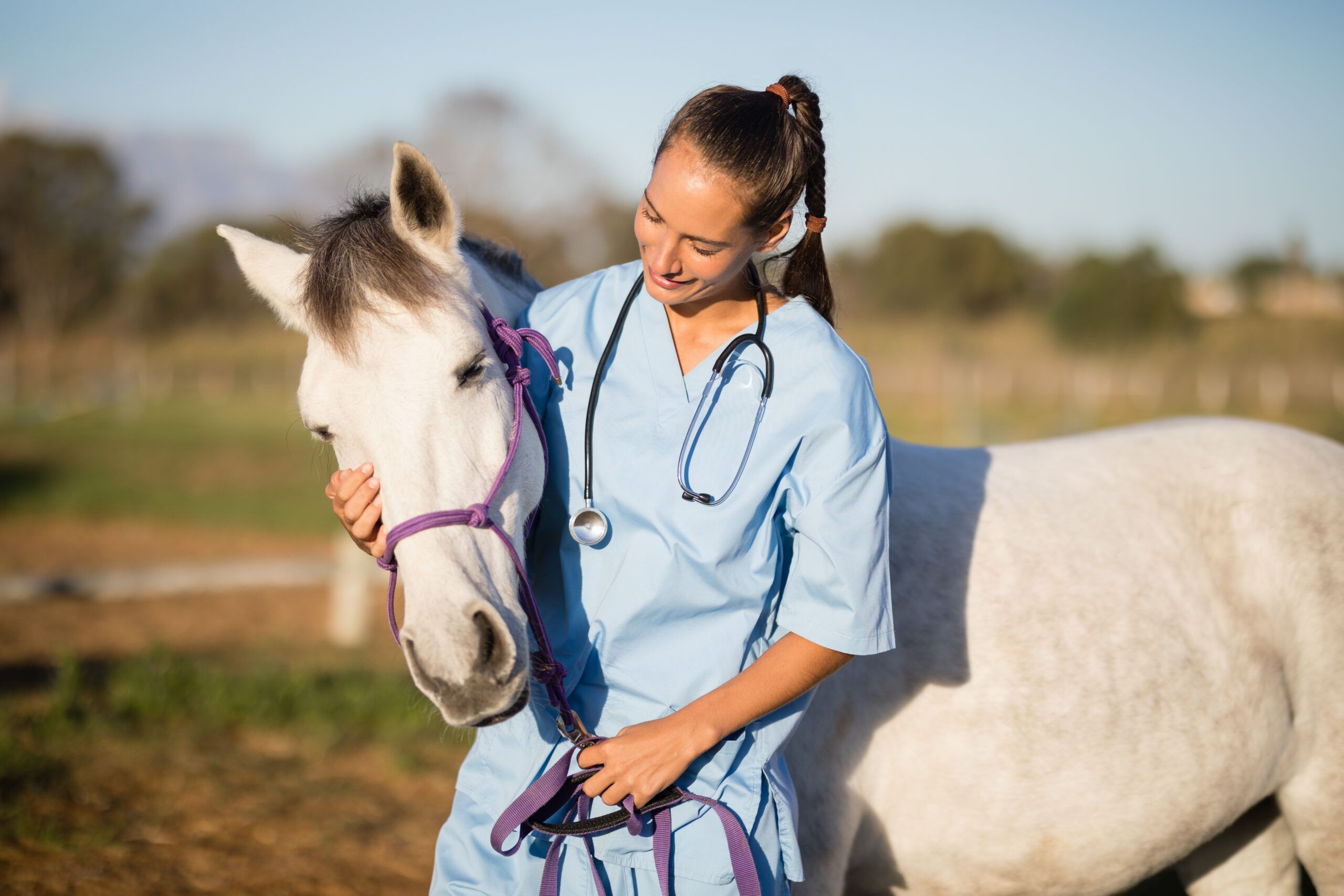 Increased attention has been given to racehorse welfare in recent years, with key players working diligently to determine the best ways to keep these athletes safe and sound. Held virtually, the fifth annual Tex Cauthen Memorial Seminar brought farriers, veterinarians and researchers together to discuss racetrack safety and the use of motion-sensor technologies to monitor racehorse health, among a variety of other equine issues.

It has become increasingly evident that serious injuries and catastrophic breakdowns of racehorses do not appear from nowhere; it is now thought that these injuries are the result of minor physical issues that go unnoticed. It’s important to note that as horses are prey animals, any lameness or injury puts their survival at risk. Because of this, most horses will hide lameness and injury, potentially compensating on other limbs.

Until recently, the gold standard for equine lameness evaluations on racetracks was the completion of a subjective exam. Though many vets can notice overt lameness, small changes in equine gait may be imperceptible to the human eye. The morning session of the Tex Cauthen seminar focused on how data from advanced diagnostics like the Lameness Locator can provide data to help recognize lameness in racehorses and prevent more-serious injuries.

Dr. Abigail Haffner presented an overview of a pilot study that used body-mounted inertial sensors to monitor 73 racing and training Thoroughbreds at Thistledown Racino near Cleveland, Ohio, and Mahoning Valley Race Course in Youngstown, Ohio. The 16-week study sought to identify trends in Lameness Locator measurements over time that may indicate a horse was at risk of injury. The study was initiated by Drs. Clara Fenger and Brad Brown, and funded by the Equine Health and Welfare Association, and the Indiana and Ohio Horsemen’s Benevolent and Protective Associations. Haffner collected data alongside Dr. Margaret Smyth of Shell Equine, based in Chagrin Falls, Ohio.

One aim of the study was to determine if horses display a gait signature–a pattern of asymmetry that is consistent overtime–and if deviations from this gait signature may be an early indication of musculoskeletal pathology. Information garnered from the study will help the research team see how stable the gait signature is from week to week, as well as determine the optimal frequency of inertial sensor exams to identify changes.

For the study, researchers placed Lameness Locator sensors on the horse’s right front pastern, pelvis and head, and trotted the horse in-hand on a straight line for approximately 25 strides. Two trials were obtained for each exam to confirm consistency of the results. The horses were subjectively evaluated by Drs. Haffner and Smyth at the same time. Dr. Haffner estimated each evaluation from sensor application to data collection to returning to stall was approximately 3 to 4 minutes.

Dr. Kevin Keegan was the next panelist to present during the morning session and he deciphered some of the initial information gathered from the study for attendees. Keegan acknowledged that racehorse injuries are a complex, multifaceted problem. “We don’t really know if lameness is a substitute measure or proxy for a pre-existing injury or if lameness is itself a mediator or direct cause of injury,” he said. If lameness is associated with catastrophic injury, the body-mounted inertial sensors of the Lameness Locator can detect it—possibly preventing future injuries.

Keegan notes that lameness is a clinical sign and not a disease. Keegan stressed that the sensors provide data, but no context with which to interpret the data—that onus is on the veterinarian. The data reported by the Lameness Locator is shown in both numerical and graph forms for veterinarians to interpret. Keegan emphasizes the importance of collecting multiple strides in a row, as was done in the study. By collecting many contiguous strides, the veterinarian can look for a central tendency.

Establishing Thresholds for Change in Thoroughbreds

Dr. Keegan compared some early analysis of the Ohio study data to a previous study using inertial sensors conducted in Thoroughbred racehorses in training.* “Our 90 percent weekly median absolute differences were actually tighter than [the other study], 13.2 mm for Diff Min head and 12.4 mm for Diff Max head which is an equivalent Vector Sum of 17.3 mm; and 5.3mm for Diff Min pelvis and 7.5 mm for Diff Max pelvis. This means that 90 percent of the weekly differences were below this value,” he noted (fig. 1). He further explained, “Despite the fact that the range in this study included horses that we know did become lame, this might be a place to start if we were looking at trying to find some reasonable range as a threshold for change that requires that a horse be more closely scrutinized.”

Dr. Keegan shared some of the longitudinal data collected to date, plotting each horse’s weekly measurements for forelimb lameness (using head Vector Sum), hindlimb impact and pushoff lameness (using Diff Min Pelvis and Diff Max Pelvis respectively). “Looking at the data like this, you can quickly pick out the horses and times when a horse measured with lameness way outside the pack,” Dr. Keegan says. He shared a few examples of horses with gradually increasing lameness or a sudden change from their usual measurements.

[It is] interesting to look at the progression, or lack of progression, of lameness over time in individual horses. Some patterns of lameness measurement over time may be hints that a horse should be more closely scrutinized for potential pre-existing injury,” Dr. Keegan said. One particularly intriguing example was a horse that sometimes measured with a mild left hindlimb pushoff lameness and sometimes measured with a mild right hindlimb pushoff lameness (fig. 2). Dr. Keegan opined, “This horse might have a bilateral hindlimb lameness that may be confusing to detect subjectively over time.” He added, “It was pointed out retrospectively that a similar pattern of shifting mild hindlimb lameness was reported for Mongolian Groom.”

While it is currently unknown why certain horses exited the Ohio study, Dr. Keegan did point out one horse that suddenly measured with a left hind limb lameness and then dropped out of the study. Reviewing race records, the horse raced the day prior and its Equibase speed factor had dropped 36 points. “We are still trying to accumulate historical information about potential injuries that may have caused [a] horse to stop racing or training, how well the horse is currently racing, etc., to see if we can identify any signature lameness measurement patterns to scrutinize.”

Considerations for Implementation at Racetracks

Race day may not be the most ideal time for a Lameness Locator exam, Keegan says. Anxiety can mask lameness as the horse becomes more difficult to handle.

“The best time to evaluate a racehorse is a day after or a few days after a race,” Keegan says.

“…this allows for the creation of objective data.”

He also suggested that it may be more relevant and easier to evaluate horses under saddle, jogging on the track. He cited the weight of the jockey to bring out lameness, the ability to better control the horse, and the ease of obtaining many strides are all advantages of evaluating the horse under saddle. He noted, “Now we can determine the side of lameness [in straight line trials] using pelvic rotation.” This would eliminate the need for a right front sensor, further simplifying lameness measurement at the track.

Keegan concluded that using body-mounted inertial sensors to measure lameness is not difficult, reduces doubt and difference of opinion, and that objective data from large numbers of horses can be collected, saved and studied. “The question on [whether] measuring lameness can help minimize the incidence of catastrophic racing injury is not answered, because I do not think we really know what the association between lameness and injury is.  But if they are associated, I am convinced that measuring and studying lameness with body-mounted inertial sensors is the way to go.”

Use of Lameness Locator Abroad

The next presenter at the virtual seminar was Dr. Bronte Forbes, a veterinarian with the Singapore Turf Club. Forbes spoke on his experience with the use of the Lameness Locator on Thoroughbred racehorses and its value in screening racehorses for soundness.

“I look at this as a ladder,” Forbes explains. “I want to get this technology on board so we can contribute to the overall situation [of increasing the possibility of racing sound Thoroughbreds]. The use of this technology could alert owners and trainers that something has changed or gone wrong [with the horse’s soundness] before a more-serious injury occurs.”

Forbes agrees with Keegan that a consensus must be reached on how lame is too lame to race. He questions if each racing jurisdiction will need its own local threshold of lameness or if racing as a whole should look at a more-global threshold that should be classified as “lame.”

“We must work together and share knowledge,” Forbes stresses. “I appreciate what regulatory vets do and see, but by adding this tool, the horse will benefit. If we put the horse first, a lot of problems will go away.” Buy-in from trainers, owners, clinicians and regulators is essential if the Lameness Locator is to be used as a regulatory tool.

Trainers in Singapore trust the technology of the body-mounted sensors, Forbes explained, and some trainers will ask specifically for the modality to be used. “This technology is often used for nerve blocking and in difficult lameness,” he reported. However, he noted, the vets in Singapore did receive push back if the horses were required to have a Lameness Locator exam done every day.

Forbes recommended that veterinarians and those involved in racehorse care continue to develop quality, evidence-based assessments of equine gait symmetry and what this means in relation to lameness. He also suggested that work be ongoing to help vets understand what information the Lameness Locator collects and how it can be extrapolated.

He concluded that the education of vets, trainers, owners and racing management benefits the industry by increasing objectivity. “Removing bias from decision making [as to if a horse is lame] is important for improving the integrity of the process,” Forbes said.