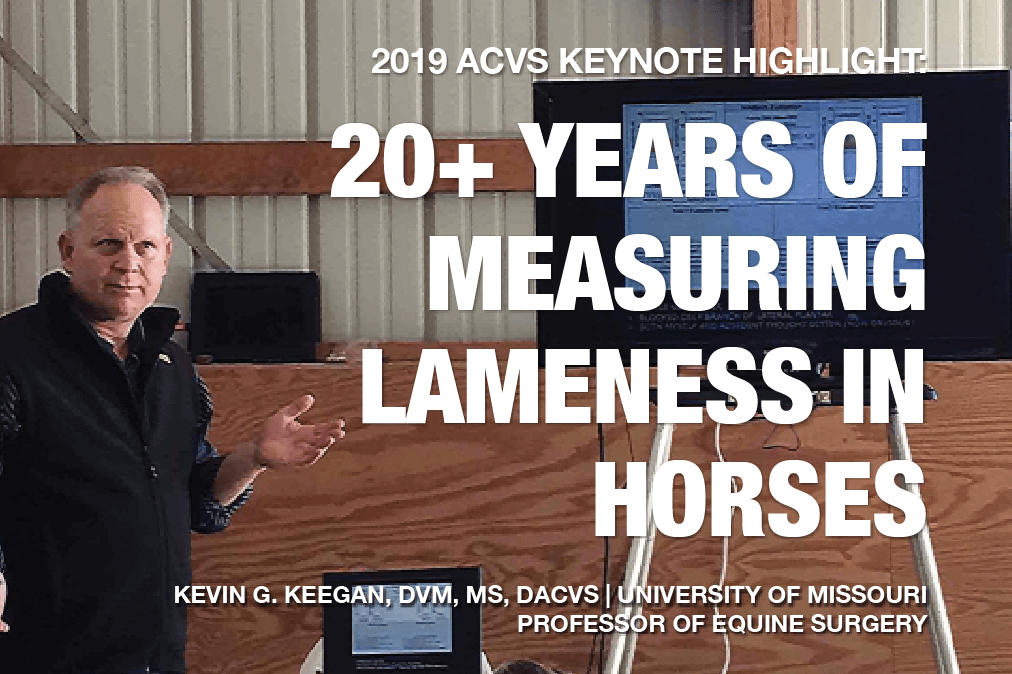 At this year’s ACVS Annual Surgery Summit, Kevin Keegan, DVM, MS, DACVS, Professor of Equine Surgery at the University of Missouri, and co-inventor of the Equinosis Q inertial sensor-based lameness measurement system, presented the equine keynote “20+ Years of Measuring Lameness in Horses: The Practical Significance to Equine Veterinarians”.  As an active equine clinician, board certified surgeon, university professor and researcher, Dr. Keegan has devoted much of his life and professional career to studying equine lameness and developing a method to measure it with high sensitivity, accuracy, repeatability and practicality for the practicing equine veterinarian.  As an overview of his presentation, we share in this article what has been learned by measuring lameness over more than two decades, and a glimpse at what the future holds.

Dr. Keegan began the discussion with the central concept that lameness is a clinical sign, not a disease. As described by Percival as early as 1873, “lameness is but a symptom… not a disease itself. Lameness may exist independently of disease”.  This concept is important to keep in mind as lameness measurement in horses becomes more widely used in the veterinary profession, both for the diagnosis of lameness and for performance issues, as well as athletic horse monitoring and management.

Dr. Keegan reminded us that measuring lameness is only the beginning of the process. Determining what may be bothering the horse, if anything, is dependent upon the skills and knowledge of the evaluating veterinarian. However, measuring lameness allows you to identify things that you may not realize without the ability to do so. Using objective methods to measure lameness is like using a microscope, allowing one to “see things better”.

Detection of lameness has historically been determined subjectively through visual observation. Dr. Keegan cited the poor agreement between even experienced veterinarians using subjective evaluation of lameness.  Why is this?  There are many reasons, which include the use of unreliable or deceiving signs, our limited temporal resolution (how fast our eyes can process movement), bias, and the known inherent stride to stride and trial to trial variability of lameness in horses.  While objective measurement of lameness is not new, it has mostly been limited to research settings due to expensive and time-consuming methods, such as the stationary force plate and treadmills with cameras and markers.  The only practical method to measure lameness in the field today is with body mounted inertial sensors.

While the clinical sign of lameness can be caused by many things, pain is the most common. Pain in the limbs during weight bearing will result in the horse either landing with less force or pushing off with less force in that limb.  Force = mass x acceleration. Decreased force on the limbs is most closely approximated (better than any other movement parameter) by the vertical acceleration of the head and pelvis. Because we don’t see acceleration very well, acceleration can be converted to position, so that changes in position can be measured and reported. If you want to know if lameness exists, the limb or limbs involved, and the amplitude and timing of lameness (impact or push off), this can all be determined by information contained within the vertical trajectories of head and pelvic movement.

The detection of lameness using head and pelvic trajectories is based on a method of fault detection. Because vertical head and pelvic movement are periodic signals embedded in the overall random movement seen or measured, you can separate movement that is periodic from that which is not. The periodic components are the horse’s normal vertical movement and vertical movement due to pain. This is particularly useful (and vital), as filtering out random movement, unrelated to lameness, can be achieved. Inertial sensors also hold a great advantage over the stationary force plate due to the ability to collect multiple contiguous strides, allowing for better handling of inherent stride to stride variability.

Dr. Keegan went on to describe some of the most clinically important lessons gleaned from measuring lameness in horses.

Lameness can spontaneously change in limb, amplitude and timing.  This is problematic for subjective evaluation as it can interfere with our interpretation of diagnostic blocks or treatments.  Lameness may get worse because of exercise exacerbation or simply because the horse is getting more comfortable with the evaluation process. Lameness can also get better due to warming out of the lameness with some exercise or due to some other stressful stimulus masking the pain causing the lameness.

Gradual improvement in a lameness with successive blocks may be an indication that the lameness is secondary (overloading a second limb due to a primary lameness elsewhere). Secondary lameness is difficult to localize. Additionally, blocking a normal horse will cause it to measure as a little lame in that limb. This has ramifications for the veterinarian in the blocking investigation as complete resolution of a lameness, especially when several distal limb blocks have been performed, may not be expected.

3. Lunging may complicate your evaluation

When horses are lunging, they are tilted toward the center of the circle, so asymmetry of head and pelvic movement is expected. There is much more horse to horse variability in lunging horses.   Additionally, horses, whether lame or not lame, lunge differently one direction compared to another.  As an example, in a 200+ horse sample of horses, 96% of horses that measured with no lameness on the straight line measured with hind limb lameness (i.e. asymmetric pelvic movement) at the lunge in soft ground. Not all of these horses had something wrong with them. It is also known that specific patterns of asymmetry are identified in normal horses, depending upon the surface characteristics.

4. Evaluating horses under saddle – rider activity has an influence

As part of a National Science Foundation study, a sensor was added to the rider that detects sit from posting trot so that the effects of posting could be assessed. A few key findings were realized. First, sitting the trot had the least artefactual effect on lameness. When the rider was sitting the trot, compared to a baseline straight evaluation without a rider, only about 10% of the time was a significantly different lameness measured (different limb). Posting, on the other hand, had a predictable effect on pelvic movement in many horses. Approximately 80% of horses exhibited an increase in push off asymmetry on the inside hind limb when the rider was posting on the outside forelimb.

Clinicians at the University of Missouri have completed a study reviewing over 1200 cases that presented for lameness or poor performance. The results of this study will appear soon in The Journal of the American Veterinary Medical Association.  Of these cases, 56% exhibited a multiple limb lameness when trotting in a straight line. Dr. Keegan used the adage of Ockham’s Razer to approach the seemingly complex presentation of a multiple limb lameness: “all things being equal, the simplest solution tends to be the best one”.

Big Data – where are we going?

Tens of thousands of horses have now been evaluated by veterinarians using inertial sensor measurement around the globe.   This data can be matched up with good clinical data and, using new data mining techniques, it is perhaps possible to find patterns useful to practicing veterinarians.  For example, it may be possible to provide differential diagnosis lists in order from most to least likely, that would be helpful to veterinarians planning how to proceed in a lameness investigation.